Tile Map Service for a CarPC

Tile Map Service is a primitive way to serve raster map data over HTTP. Most public map services like Google Maps use it. A very short description of the protocol:

A better understanding of how TMS works might be required to fully grok this blog, so you may start with Wikipedia article on TMS and follow links from there.

There is no standard on how to encode X, Y and zoom into an URL. For example, OpenStreetMap own tiles have this template:

Which probably matches filesystem layout of the server. Google encodes these variables as URI parameters. It will also require its internal API version as a parameter and a special cookie:

Bing encodes all three variables into a single string, that will define a filename:

There is no standard of what kind of file will be served in response. It could be JPEG, PNG or GIF. Server shall define that in Content-Type header.

More devil is in the detail. There is no general agreement on where the tile (0,0) is. There are at least three ways of defining tile (0,0):

The worst thing is that what a TMS assumes the Earth to be. The basic assumption is that Earth is a sphere and we project it on a cylinder, that touches equator. In this case X = f(Longitude) would be a basic linear function, and Y = f(Latitude) would be rather a simple function:

This assumption is what most popular services Google and Bing do. However, there are services that take an assumption of the Earth shape that is closer to reality - an ellipsoid. Russian TMS services Yandex and ScanEx provide better satellite imagery of Russia and adjacent countries than global companies do, but these two services use ellipsoid model of the Earth:

where R is Earth’s radius and E its eccentricity. This yields in less longitudal distortion of images, barely noticable, but in more headache in TMS layer implementation.

Java OpenStreetMap editor can work with any TMS natively, if that TMS assumes the same projection and location of (0,0) tile as Google does, and has a straightforward way to insert zoom level and X,Y coordinates into URL template. JOSM can also do ellipsoid TMS if explicitely told to use ScanEx data, I added this back in 2011.

Thus, if we got a TMS mosaic on local filesystem, with help of a web server we can serve it directly to JOSM processing only URIs, but not processing any map data. Since we control the web server, we can adjust the URI, matching actual layout of mosaic cache, for example rewrite zoom/x/y to zoom/y/x using simple nginx rewrite rules. We can recalculate the position of (0,0) tile with help of perl embedded in nginx. This all gives us some flexibility. We can reuse unmodified tile caches created by different tools that download maps from the Internet, for example SAS Planet software tool. This is an important feature, since it allows our precious “open-source DIY navigation” share map data with people who use other software.

Let’s list the goals I want to achieve here:

For every service I use, I’m going to create a directory to store the tile cache in zoom/x/y file hierarchy:

As you already noticed, with TMS number of files per zoom grows exponentially. As an example, for my last journey I have had 23 millions tiles, 360 Gbytes of data. Copying 23 million files from my desktop to the CarPC over SSH, NFS or SAMBA will take days. Not to mention that CarPC runs slow Intel Atom processor. This is a real problem in TMS management, you may read a discussion of SAS Planet users forum about this.

Here ZFS comes to the rescue! Every TMS cache directory is a separate ZFS filesystem:

ZFS filesystems can be sent via zfs send/receive, which works at block level and doesn’t depend on number of files. Speed is limited by 1 Gbit/s network card of the CarPC.

Whenever I download some area, I take snapshot of the filesystem, and record what does each snapshot contain:

If CarPC already got older snapshot, I can update to new one with incremental zfs send. Now updating TMS data on CarPC takes only a few minutes.

First, I’ve written a library in Perl that supports projecting, addressing and URL generation for every TMS service I use. With help of HTTP::Async module I created a function that will fetch a rectangular boundary box with given geographic coordinates to given zoom level at a decent speed, paralleling several HTTP connections.

However, areas of interest usually are not rectangular, but of an arbitrary shape. Fetching minimal rectangle that would have my oddly shaped area inscribed is a waste of time and disk space. So, next with help of Math::Polygon I’ve written a more useful function, that would fetch minimum tiles required to cover an arbitrary shaped polygon at given zoom level.

Although I travel to different places, distant from each other, I’m storing all data that originated from a given TMS service in the same directory. Sometimes I need to filter out and delete or extract some area out of my collection. This calls for yet another script similar to previous one, but basicly working with existing cache rather than fetching from Internet.

All this pile of ugly code lives here.

To define a polygon of course I don’t type out geographic coordinates out of my head. I use JOSM with base OSM layer, and click around the area of interest: 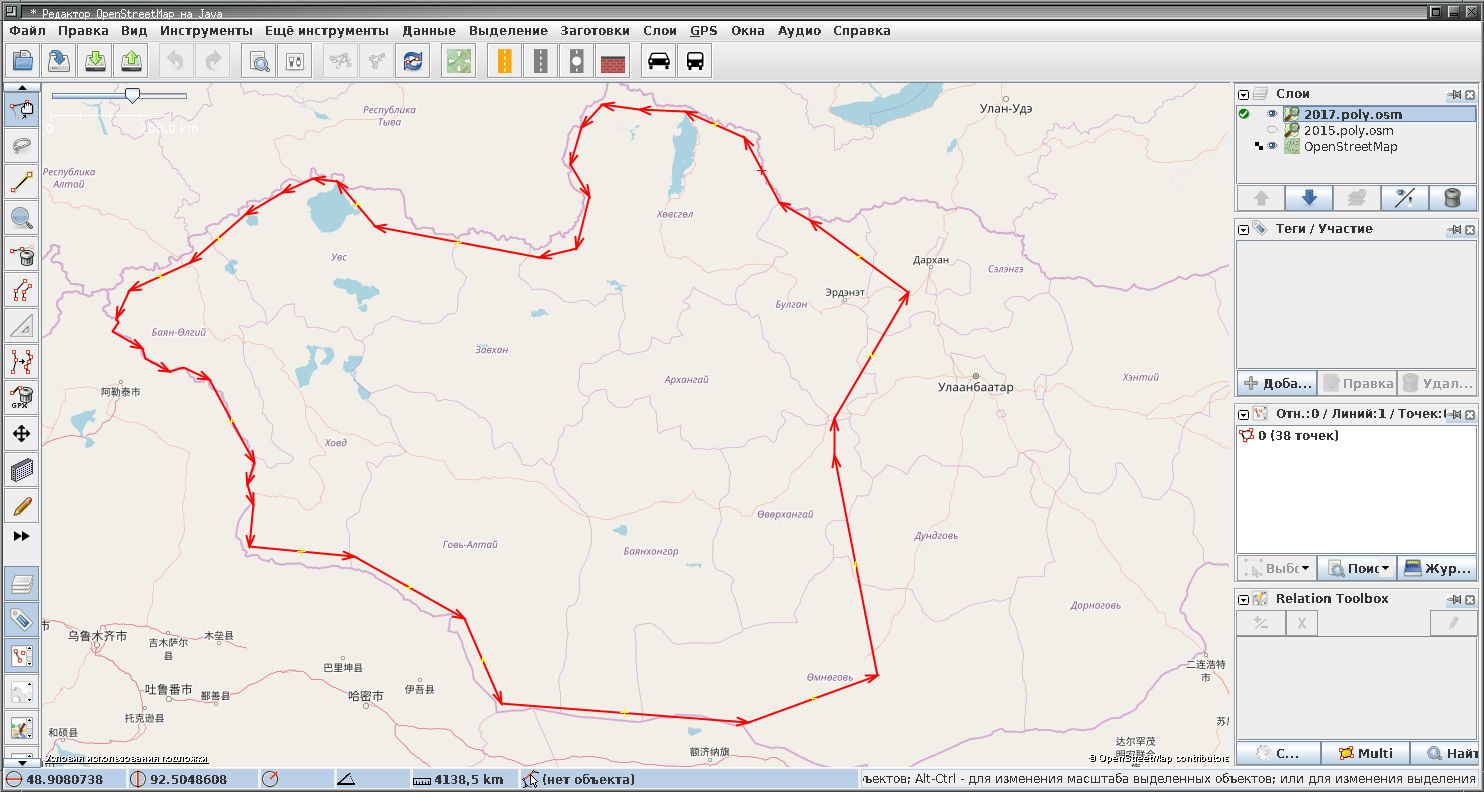 Then current layer is saved and converted to a .poly file that Math::Polygon, and thus my downloading script understand:

How deep should we zoom when downloading?

In the code snippet above I specified downloading from zoom level 1 to 17. Why? At zoom level 17 the whole Earth is an image cut into 217x217 tiles, which means 33554432x33554432 pixels. Since equator length is roughly 40,075,000 meters, at zoom level 17 one pixel represents roughly 1.2 meters of actual Earth surface. This allows to clearly identify edges of a forest, small creeks, individual trees, changes in type of vegetation and of course roads, even single tracks. Higher zoom levels are called sub-meter resolution and allow to identify cars and humans. Usually sub-meter imagery is available only in densely populated areas. We aren’t interested in them. In areas where sub-meter resolution is not available zoom levels 18 and 19 still exist, but they are just image at level 17 resized, not bringing any new information.

During a journey I may find myself in an area that wasn’t downloaded but has mobile internet. In this case I’d like to fetch tiles from the Internet, but cache them aggresively. To achieve that, I will access any TMS via local nginx, that can be configured to first try local storage, and in case of no data there, it will proxy me to the original resource, of course caching the result. So, files pre-downloaded at home by the script and files downloaded on my way by JOSM itself would share the file cache hierarchy.